Kabul; 26 April 2016: Members and supporters of SPA gathered to condemning the dark days of 8th and 7th Saur – 28th and 27th April, and chanted the slogan, without the prosecution of criminals our people will never see peace and prosperity. Women and men, participating in the gathering, were hold the placards depicting the pictures of victims of four decades of war.

Selay Ghaffar, Spokesperson of SPA, said that 28th and 27th April are the two unfortunate and calamitous days of our sanguinary history of homeland which is bounded with crime and destruction. Calling the warlords, criminal and minion, she added:

“The perpetrators of calamities of 28th and 27th April, both have the slavery chains of outsiders in their neck, and acted according to dirty policies of Russia, USA, Pakistan, Iran, Saudi Arabia and etc. drifting our country to quagmire. However, still the dark clouds of these two ominous days have spread over the sorrowful atmosphere of the country, which resulted in the four decades of terror, destruction, collapse of economic, cultural and social infrastructure. And today these two are jointly the factors for brutalities and bloodshed, and swaying the path for outsiders middling.”

The protest songs of Shikab Mosadeq and Ants Band were also played in the event. At the end a theatrical play showing trial of war criminals was performed. 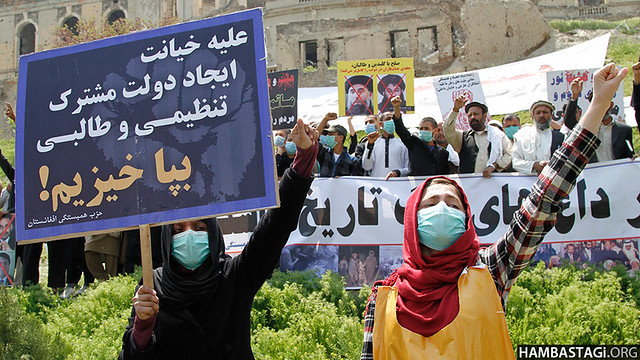 Fethullah Gülen’s Schools and Dormitories: Centers for the Promotion of Fundamentalism in Afghanistan

SPA Protest Against Missile Attacks of Pakistan on Kunar Province

We Can Overcome The Occupiers And Their Minions Through Our Unity And Insurrection!

Awareness, organization, struggle: No other way for women’s emancipation!

Selay Ghaffar Condemning the Occupation of Afghanistan by US Govt.

The “Gaza” that is Afghanistan and Gaza, Palestine, Drown in Fire and Blood While the Oppressors Regale and Plunder!

7th and 8th Saur: Celebration for Criminals, National Mourning Day for Our People!

We have 164 guests online