Once again, the Loya Jirga (Grand Assembly) was rascally misused by a handful of well-known people, who have repeatedly proved themselves criminals, lackeys, embezzlers and anti-people, along with nods of Karzai’s puppet regime; and predictably agreed to sell Afghanistan to the US aggressors. With just a gesture from their US masters, Karzai and his disciples wasted 10 million US$ from our poor nation’s treasury for a hypocrite move, so they can fool the world by propagating that this disgraceful treason supposedly took place “with the guidance of the Afghan nation”.

In the past, Russian puppets the Khalq and Parcham arch-traitors arranged similar fraudulent Jirgas to justify their servitude to the “big northern neighbor” under the name of consultation with the nation. This did not serve their purpose and they were thrown in the bin of history along with their masters. Today, once again, Karzai’s puppet government is replicating the failed and shameful attempts of Russian agents, but today our people are conscious enough not to fall for such treacherous games.

Agreement of servitude to the US and allowing its permanent military bases in Afghanistan is no new heated discussion. For the past ten years, US and its allies have sited their gigantic war machine and suspicious bases in different parts of our country, so they can face the rising Asian powers and safeguard its supreme military position in the world. The treason of signing the agreement of US’s servitude was committed in 2003 by Dr. Abdullah himself, far from the public eye, but this time with the Jirga, US’s mercenaries wanted to put the stamp of “nation’s demand” on this treacherous act as well and make it look legal.

Arch traitors and capitulators, lackeys to the US try to show that the fortune and bright future of our country lies in the strategic pact with the US. However, our people know that the US government has been one of the main causes of the destruction and misfortune of our country in the past thirty years; that this war-monger government created and nurtured Jehadi and Talib criminal bands and handed over their bearing rein to the ISI. For its own strategic and economic aims and dominance, the US government minced our people and imposed upon them the most dark-minded, anti-democratic, wild and anti-people bands.

By supporting the permanent US military bases in Afghanistan, the ridiculous Loya Jirga actually said goodbye to independence, sovereignty and authority of the people in their own homeland; and dedicated Afghanistan to an occupier whose flag has been tainted by the blood of countless other nations. This disgraceful treaty is no different from the “Gandumak Treaty” and those who have signed it have saved their names as national traitors in the pages of our history.

To deceive our people, a statement was issued with a long list of big delightful demands from the US government at the end of the Jirga. Even if they are accepted in the strategic pact, the US, as an unreasonably powerful state which wants to be the sole player that runs the world, does not feel obliged to practice any international agreement and will not keep its promises to a poor small country like Afghanistan. The terms the US will implement on our people after the signing of this pact, are so degrading and contumelious, that its lackeys didn’t dare to reveal them before the members of the Jirga. These sirs and madams are forgetting that when a government cannot bring the smallest degree of prosperity, facilities or freedom for its people, it cannot perform any positive service to our people too. They don’t know that right now the US government is facing uprisings by millions of its fed-up people, called “Occupy Wall Street”. The great American people are raising the slogan of “We are 99 percent” in protest to their remorseful living conditions and have brought the cruel government of the country to its knees. These promising protests are growing and gaining momentum day by day and might shake the very foundations of the White House and Pentagon.

The US is facing its most risky financial crisis and is unable to hold the world under its financial influence anymore; therefore it will resort to using its unparalleled military power to threaten emerging powers who no longer want to be under the encumbrance of the perverse US government. The creation of extensive military bases in Afghanistan is one of its strategic schemes to completely dominate the world militarily. In addition, the US believes looting poor third world countries’ natural resources will rescue it from its deep financial crisis. Just like Iraq and Libya were reduced to battle and blood for looting its oil, Afghanistan’s vast mineral resources which are within easy access of its puppet regime, will also be plundered.

The US has also turned our homeland to a mafia state of drugs and rakes hundreds of billion dollars every year by secretly trading them. It would never voluntarily give up this significant income. If during the Vietnam War the US troops smuggled drugs in the coffins of their dead and secretly brought them to the US, it now does this in their B-52s in Afghanistan with no hindrance.

The criminals, traitors, pillagers, and despots need the permanent presence of their masters because the people hate them. They also see their enormous and ill-gotten wealth in danger if the foreign forces leave. In the past ten years, the US pulled them out of their hideouts and made them ministers, directors, ambassadors, Martials and the richest men of the country; therefore, it is only natural for these cruel people to worship the US and try their best to legalize its presence. They think the US is an undefeatable force but they are forgetting the history of their infamous defeats by the freedom-loving people of Vietnam and now Iraq. The US invaders bring nothing to our people except ill-fortune, poverty, addiction, ethnic divisions, and chains of captivity and bondage.

The Loya Jirga members unanimously agree upon the reasonability of this dishonorable pact as it might end the meddling of Pakistan and Iran. These people are just fooling themselves and refusing to face the crystal-clear truth that the shameless interventions of Pakistan and Iran are effective due to the presence of their mercenaries and spies in the highest posts of the Afghan government. It was the US that allowed the bloody hands of Pakistan and Iran in our country and placed the most infamous ISI and VEVAK agents in the corrupt, mafia regime of Hamid Karzai.

Most of the Loya Jirga representatives shamelessly request US to defend the country borders from foreign interference. This is the limit of dastardliness and cowardice that they ask invaders to protect our motherland. They mud-slide the proud history of our independence-loving people fighting foreign invaders and metamorphise the title of Afghanistan as the 'graveyard of empires'. A nation that cannot defend their country from occupiers deserve to be hated and destroyed. But the poor people of our country have proved it many times that they are capable of defending their country from invaders with empty hands provided that they are freed from the fetters of internal lackeys and traitors.

A country that has US military bases on its grounds can never make tall claims of independence-seeking and those who give Japan as a positive model, are ignorant of the animosity and tireless and steadfast struggle of the Japanese people against the US bases. Japanese people have always protested and led huge rallies against the US bases, who follow no rules and threatens their independence. The public opposition has forced the Japan and US governments to consider moving the Okinawa base elsewhere.

History bears witness that no nation leads to freedom, justice and prosperity under the auspices of an occupation force. It is the duty of a nation to sacrifice their lives to break the chains of oppression and despotism. The US lackeys and so-called analysts who have no belief on people's power cannot understand this course of history.

The Solidarity Party of Afghanistan with the voice of our suffering but independence-seeking and patriotic nation condemns and calls any kind of agreement for the permanent US bases a national treason. We will rise and struggle against this shameful historical stain and will expose the dastard elements that approve this shame.

Fetters of national traitors and foreign occupiers can only be unchained by the people themselves!
Death to Jehadi and Taliban murderers and their foreign masters!
Long live the pro-independence and anti-fundamentalist movement of our country!

The Demagogic Hue and Cries of 2014 Achieved Its Objectives

Predictions that have been confirmed 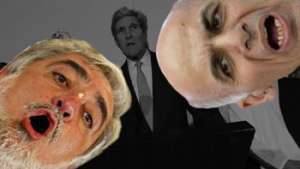 The truth on Afghanistan

The Ignoramus Mullah Omar Was A Hand Tool of US and Pak Governments!

The Ominous Vultures of 7 and 8 Saur Still Rule Our Nation!

With the US, NATO and their stooges, peace and prosperity are nothing but mirages!

Our people will prosecute the war criminals of three decades!

We have 184 guests online